I’ve done nothing with my life so far and yet I feel good about it!

Do you remember how your parents and friends were telling you happiness is what you are, not what you have or done? Well, that’s me! Not the happiness, no, I’m the happy one with his life and self-being.  Except…

There is a thing I’ve done in life. And I only meant it for the 30 days until today. It’s discovery, it’s a miracle, it’s the hidden power to nature’s youth. I have found the answer to the question

Three decades I had to spent to reveal a mystery so obvious. I was casually going through the photography contest for April’s photos when it first hit me, but I’ve realized it only after the 160th photo in the competition. It was in the images themselves! That whole time!

For years I’ve been questioning myself how come April is always looking bright and neat, with fresh colours and a nice haircut on the crowns of the trees. What was that made the image of that month, living in the imagination of most people, so memorable and inviting?

But now, once I have it figured out, I am feeling certain and ready to share my revelation with you. The motivator that made me feel good, even though I have only accomplished 1 thing so far for the last thirty days.

"Ask and You Shall Receive", April Returned

I saw the beauty of the kids playing in the green grass. I saw the live image of the music dressed in a future woman’s body. I saw the princess missing from the story where she kissed a prince turned into a frog.

I would do my best to recreate the revelation that came upon me and handle it to you. Try and absorb these mentioned feelings, while you enjoy 10 of the photographs who made an impact in my life and took the top prizes on VOUBS. 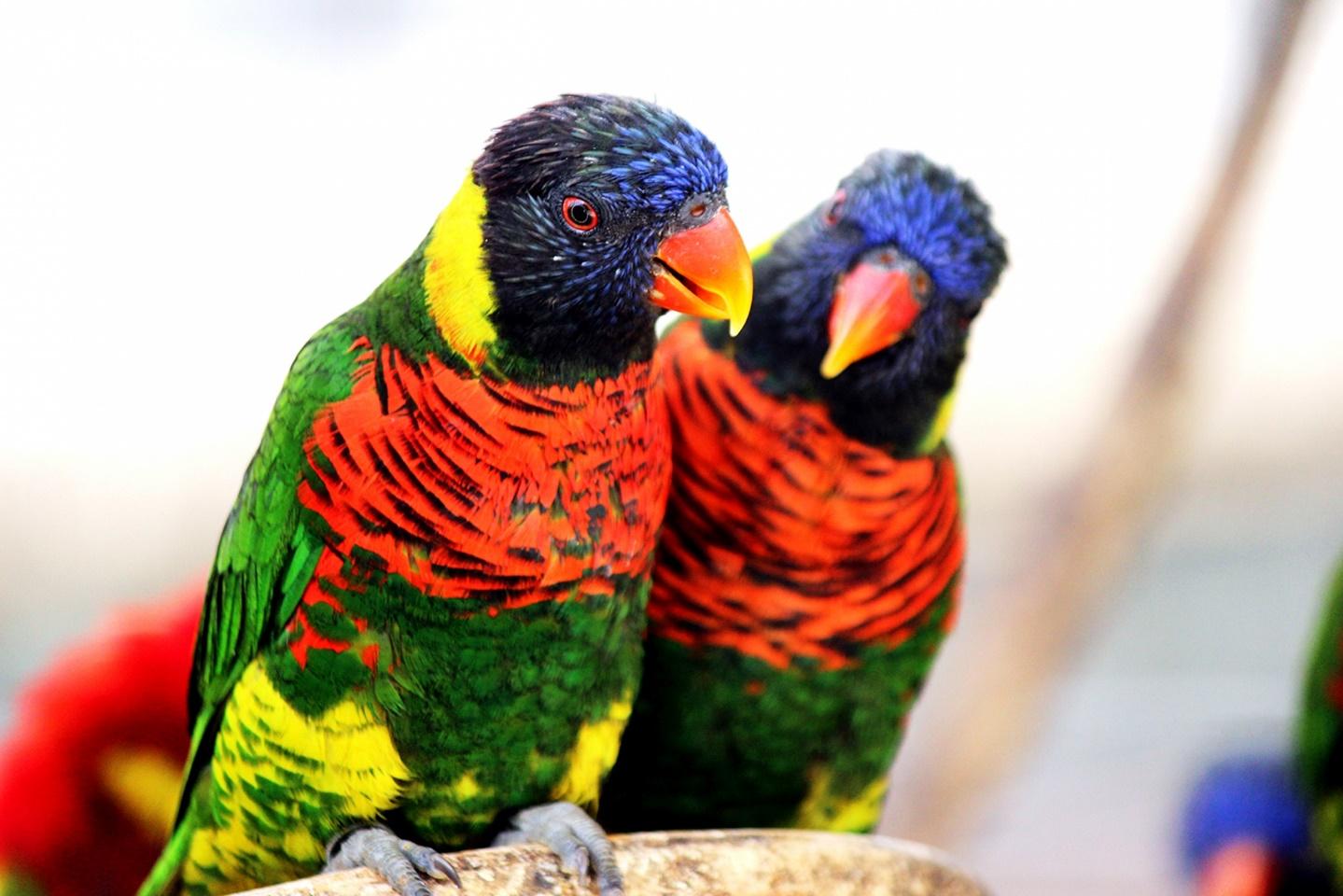 One of the most colourful and attractive birds are the rainbow lorikeet parrots, which by no means are entitled with that name by accident. Its’ fascinating colouration makes him a symbol of the reviving nature during springtime.

An interesting fact about these birds is that they grow to about 32 cm long and spend most of their time on trees, eating different seeds and insects, inhabiting the suburban areas in Australia, Indonesia, Papua New Guinea, Vanuatu, New Caledonia and the Solomon Islands. 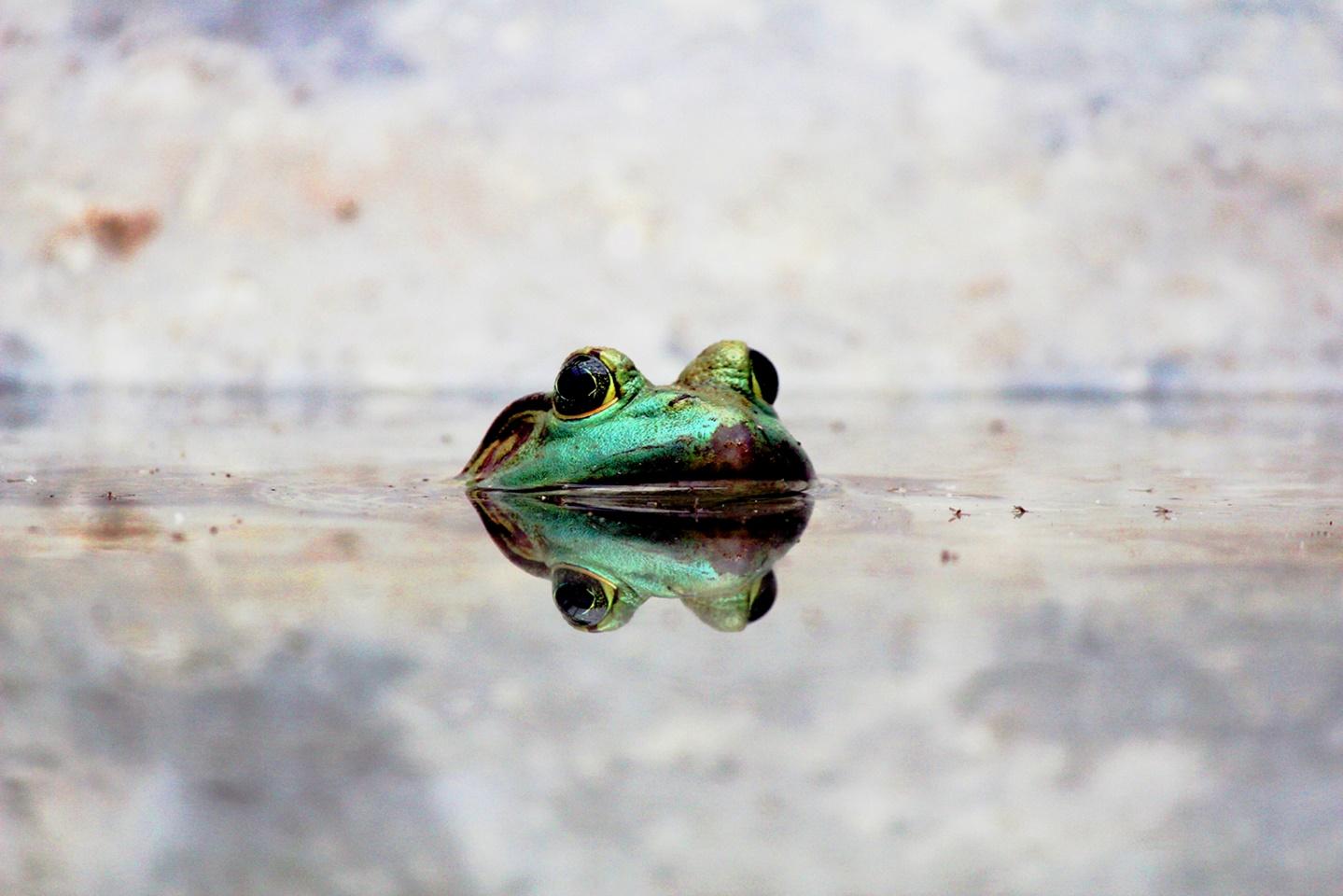 Midst April is when the tetrapod amphibians are rapidly leaping towards reaching their breeding climax for the season. Quite naturally, one of the frog representatives fell under the lens of a photographer in that time. Adding the fact that April is the international frog month and you could see how the image is banging on the April’s door. 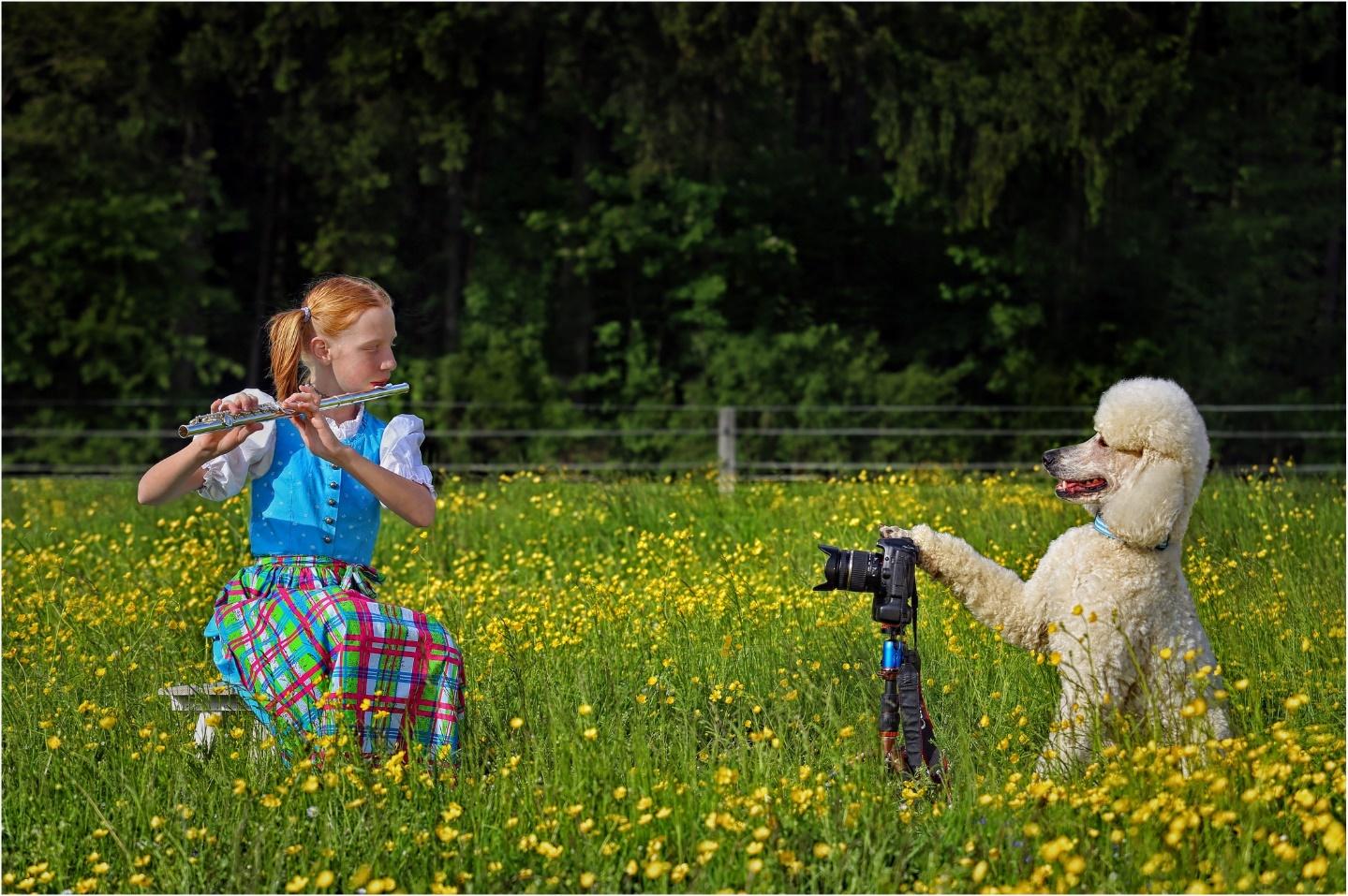 A thing I adore about spring is how wild she is. Not yet restrained by humanity and the hot temperatures, nature goes untamed when it first begins to flourish, motivated by the suppressing power of the winter that has ruled for months until now. It’s a season of creativity. Such we see in this photoception taken by a man, taking a photo of a dog, taking a photo of its’ lady owner.

Come out of Your Shell 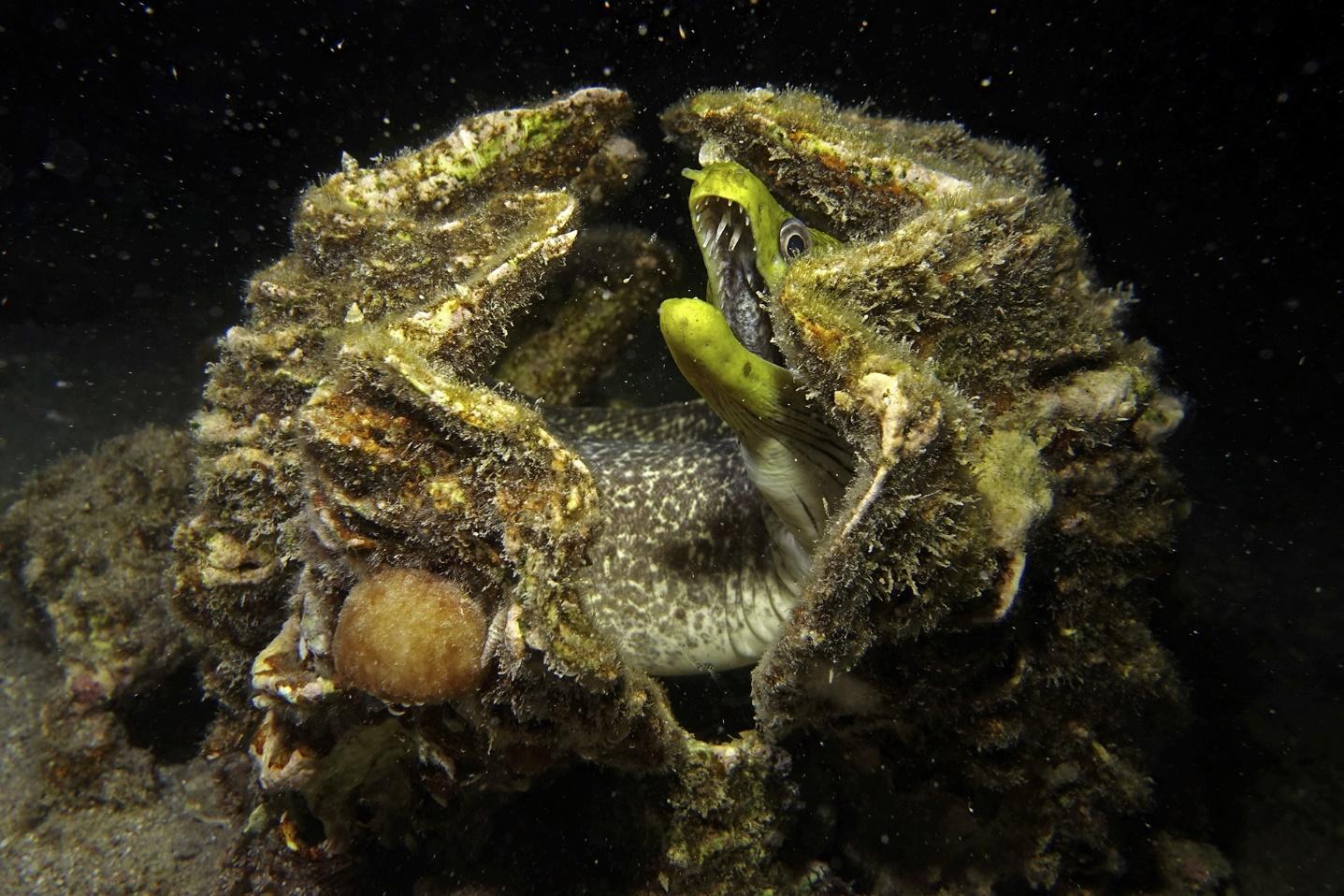 Not only animals, living creatures and plants on the land are becoming more creative during the second quarter of the year. Sea creatures are also lurking in the deep dark waters, hiding their stories, one of which we are able to witness thanks to the rising temperatures of the water and the open season for divers. This moray eel was photographed, while preparing to take a rest for the night in the shell of what used to be a giant clam, possibly tridacna gigas. 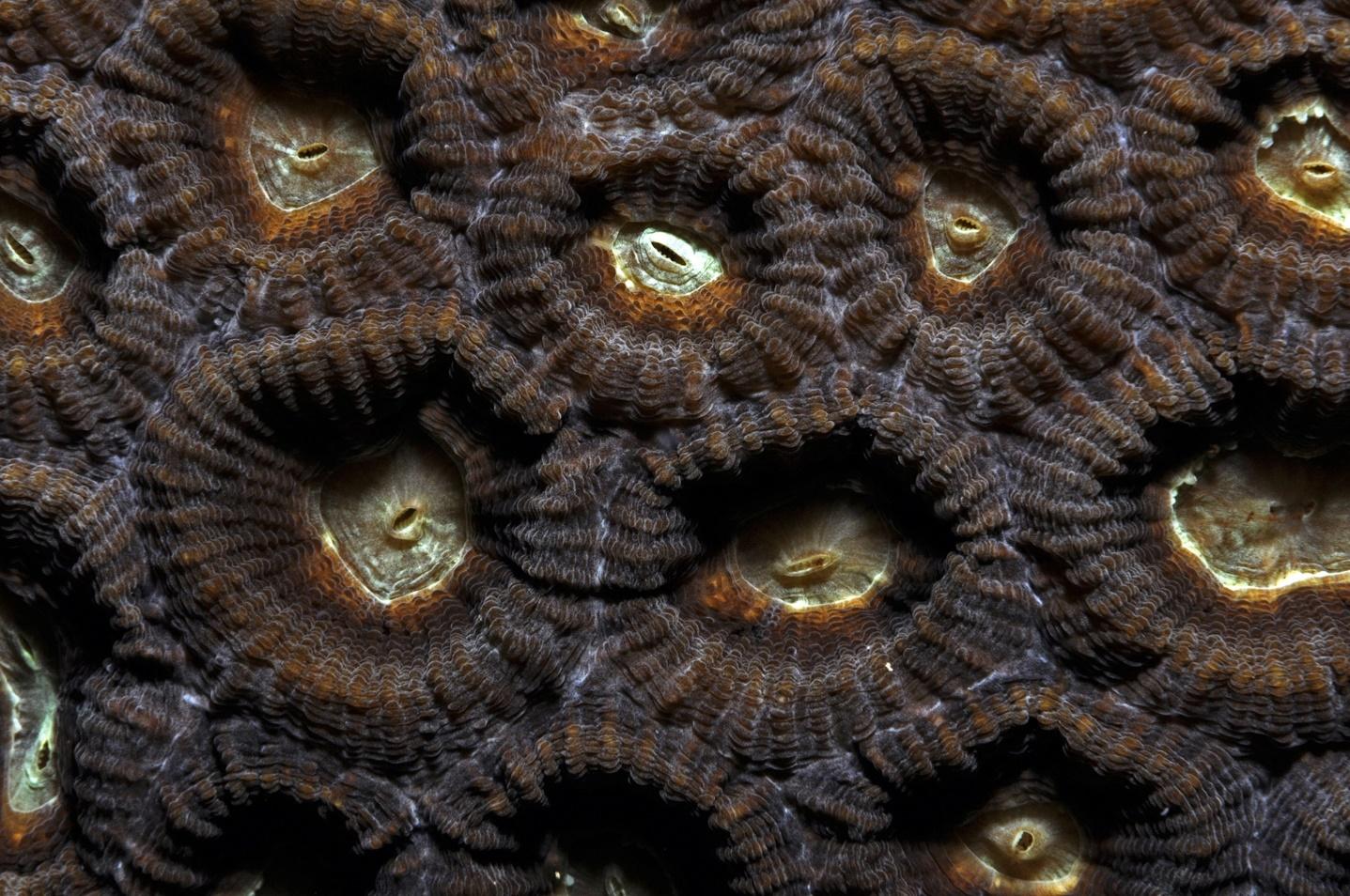 Yet another underwater photography shows a remarkable view of corals in different shapes and colours, forming a pattern that resembles cell division processes, associated with new lives.

Curious you might find the case of this photo and its’ author. Take a closer look and you shall see that it’s the same one as of the preceding photo and not only, but both images have finished with exactly the same total score in the competition, sharing the 6th place. 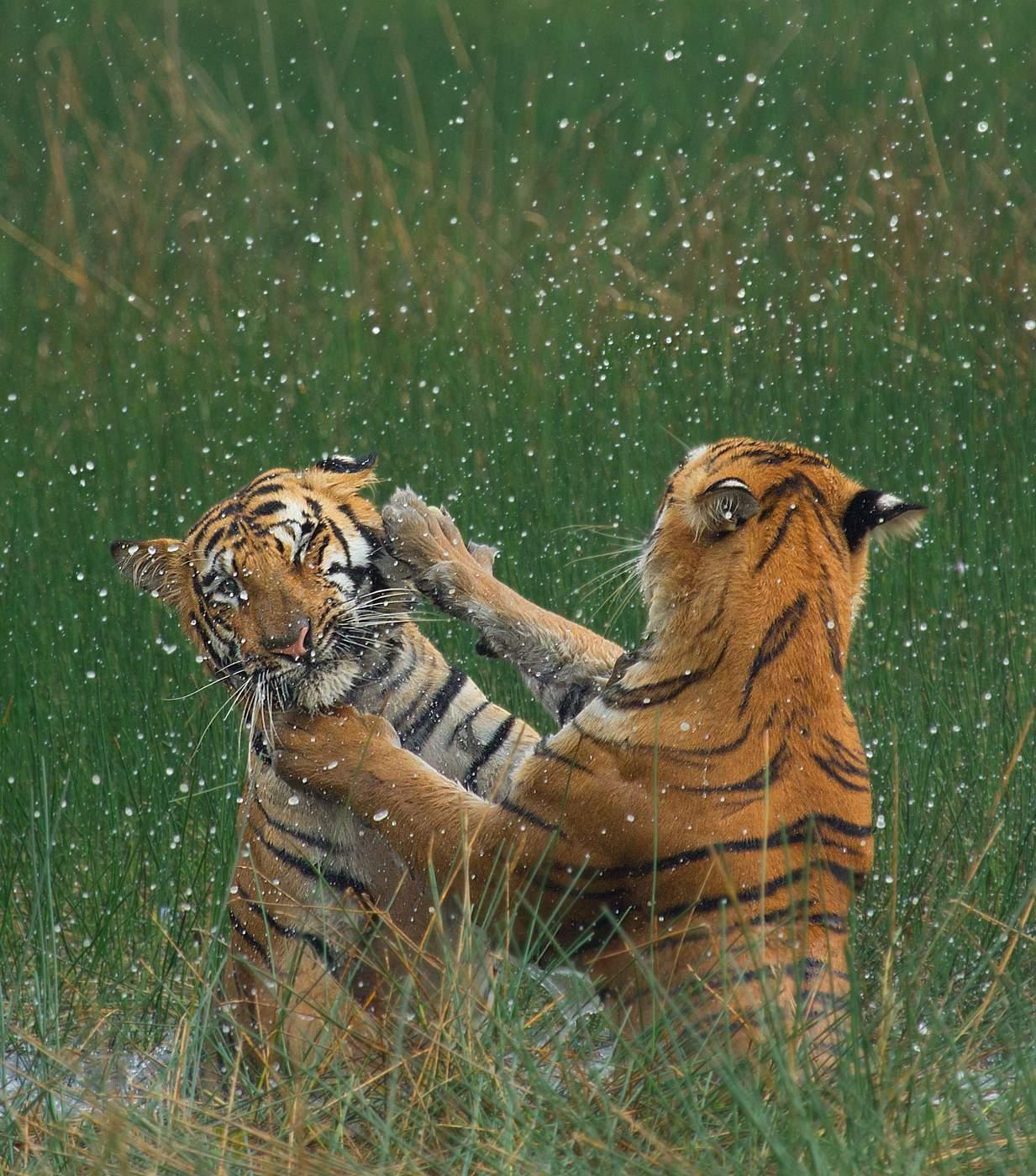 On the image are a mother and her cub, fighting for the purpose of the little tiger growing stronger. A few months from now and he is going to fight for its’ own food, so he has to be prepared to take some punches and claws. 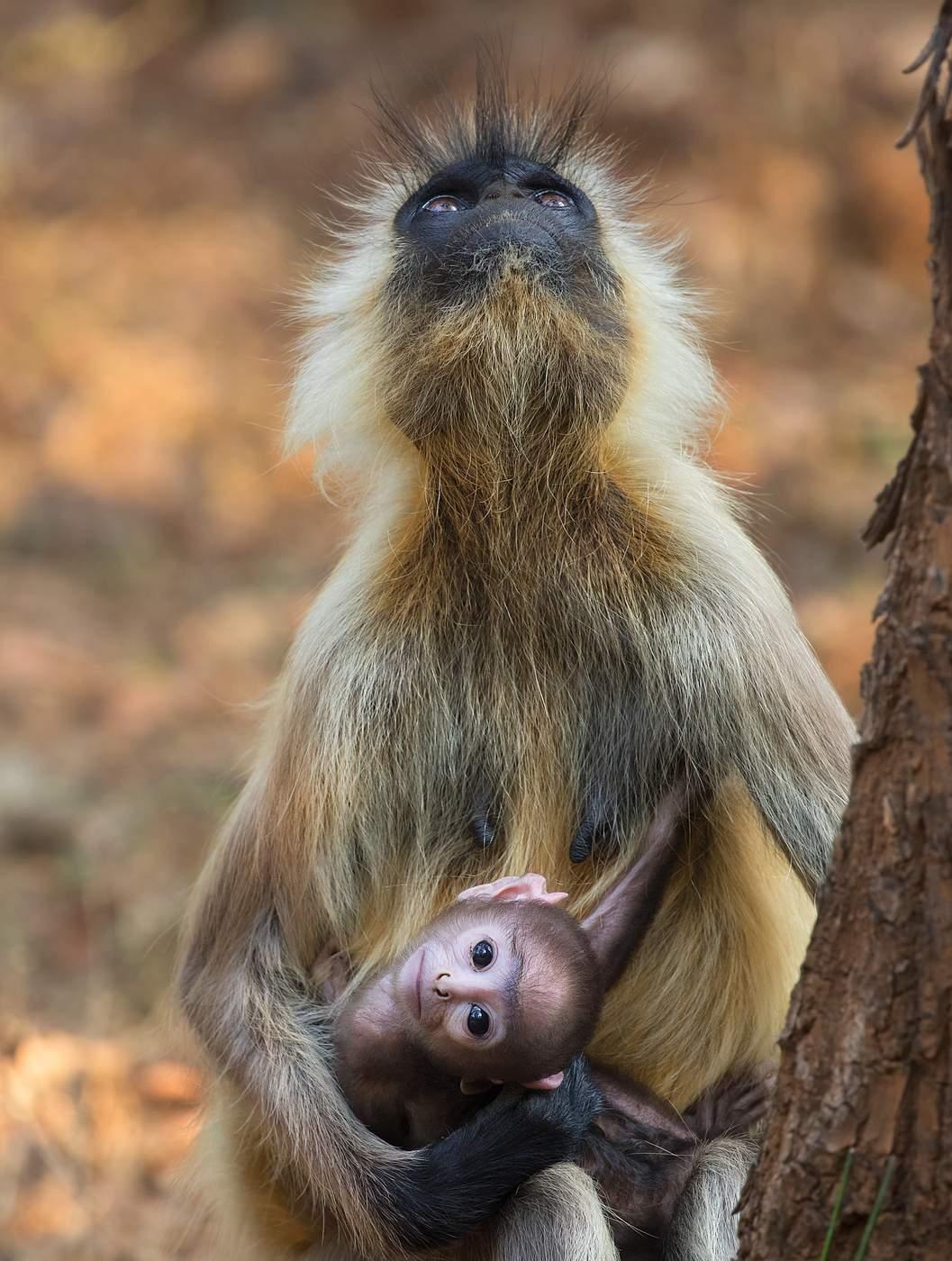 India is the heart of the colony of gray langurs. Although, they could be seen in Bangladesh and possibly in Afghanistan, this mother and her baby are present in the first destination.

Gray langurs thrive in 3 social groups. The first one consists of one male, many females and offspring. The second group includes males and females from all ages and in a large number, while the third one is involved with only males. This two specimen would most likely join a group from the first type. 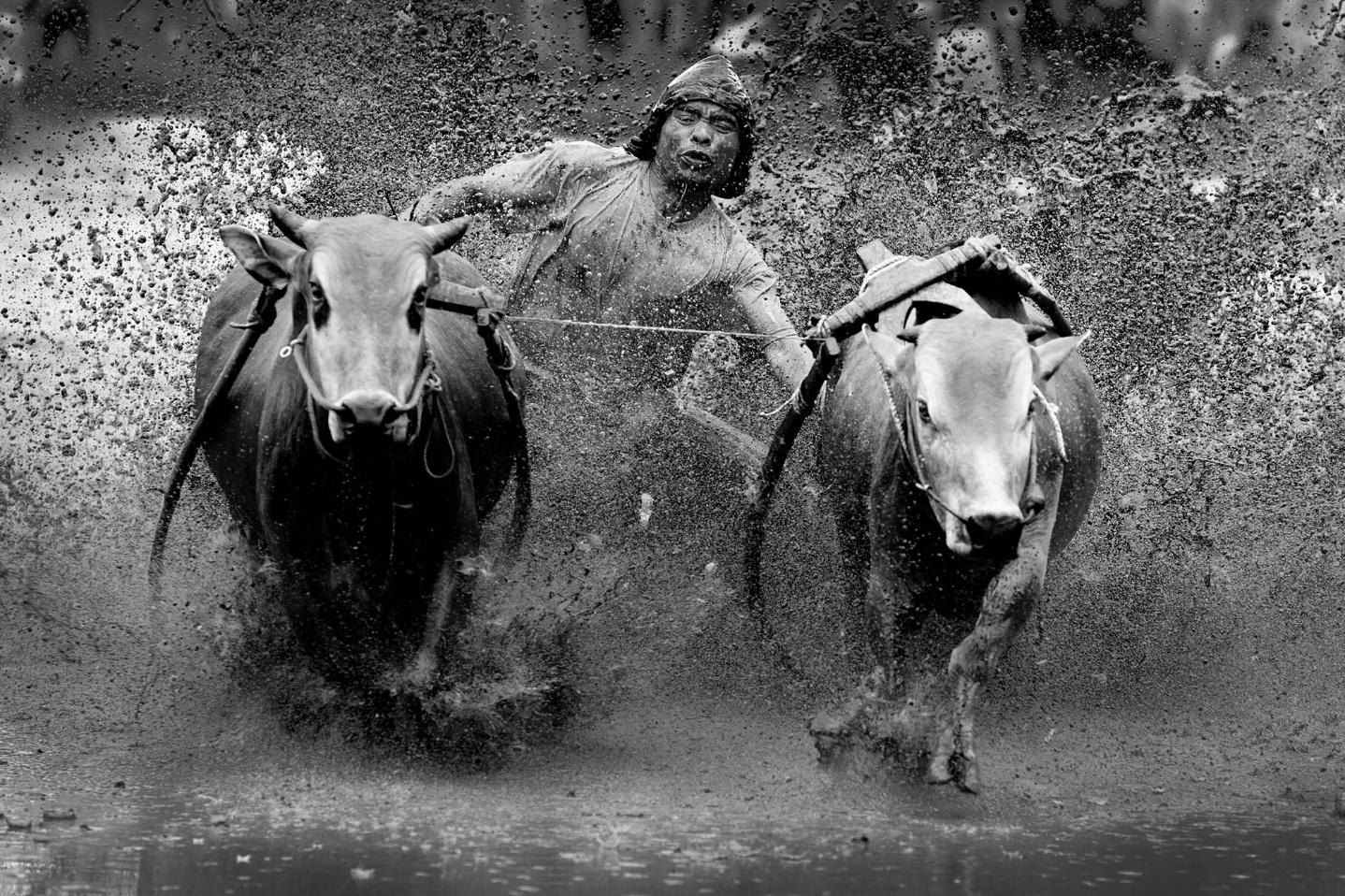 On the winners’ stage, it’s the sport that goes familiar with countries like Spain, India and Pakistan. While at the plain sight it has nothing to do with April, it’s abstract relation is the power that the cattle have held within, just like many of us did during the snowy days. Considered as a harmful sport, the bulls race is an activity that is a feast for some nations, and the photo of it brought a prize worth 40 WINGS. 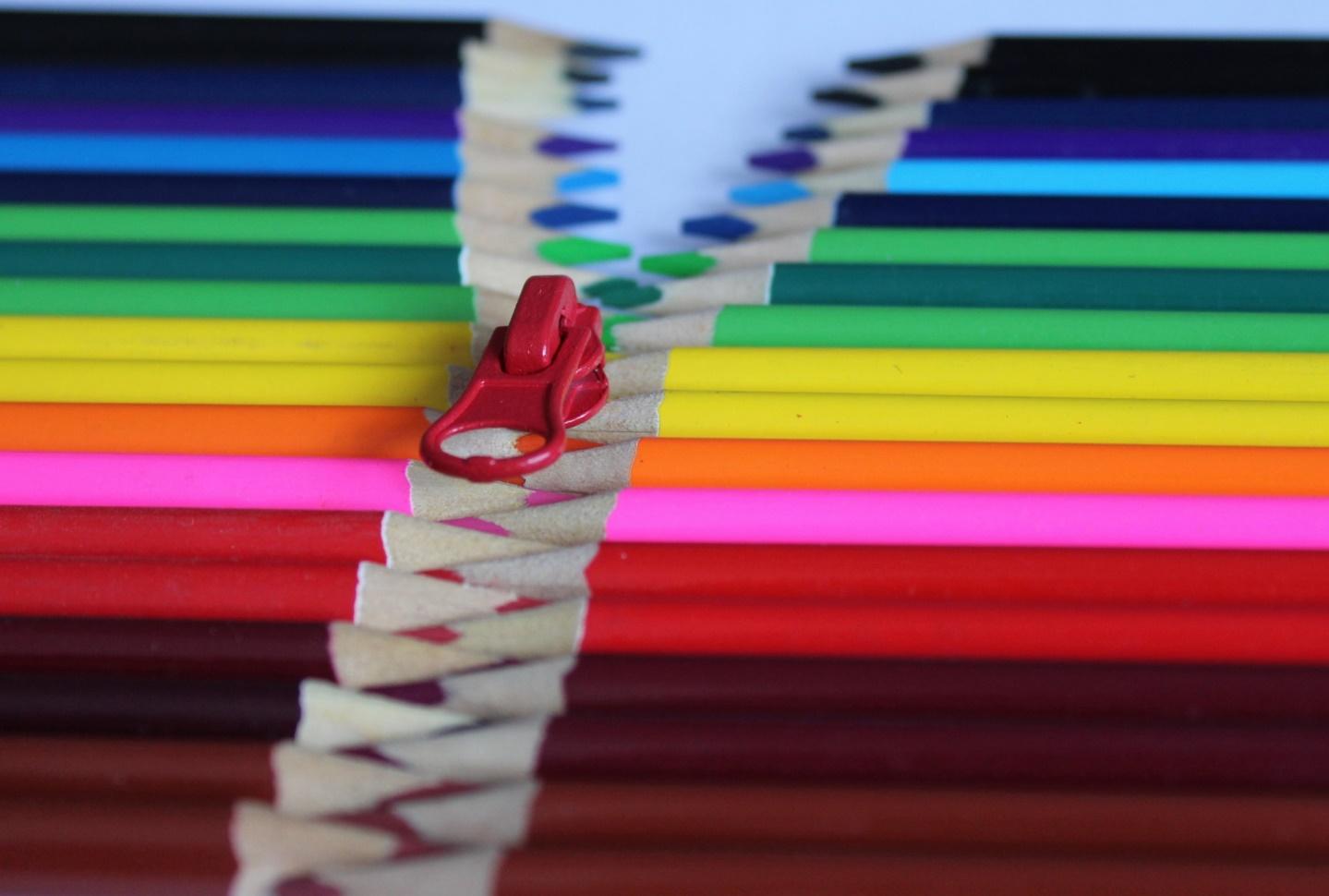 Can you see the hidden logic of that image? Let me put it as a riddle, so you can try to guess it.

From black to blue, the clouds are shading;Time is passing, the seasons fading. To show my nature, the zip is waiting,at colour green, my name is…

Write down your suggestion in the comments to see if you and others can get it right. 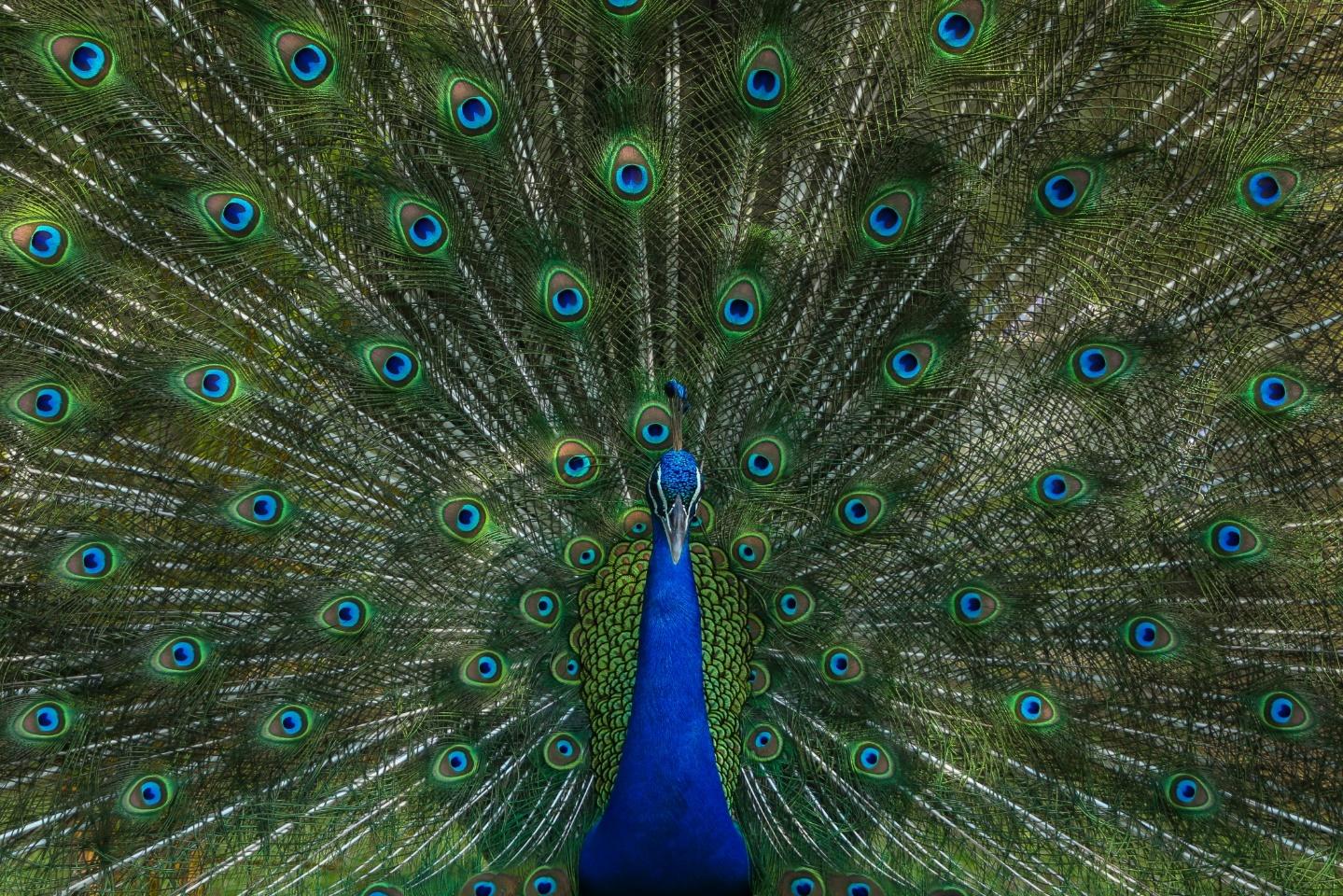 The peacock is majestic but never shows its’ beauty without a reason and to anyone, just like the answer to the question from the headline stays hidden for most. From here on, I’ll leave and won’t shed another word, instead give you time and space to think about what did I meant. In case it seems blurry, stay put, the hint is coming.

If you are inquisitive, however, of what the author had to say about his work, follow up the link from the image or visit the April’s 2018 photo competition. In the meantime, do remember:

The Power Is with You

If you choose to see the nature’s beauty, then you would be open for what not only April but any month is willing to give you.

Be the doer, that you always say to yourself you should be. Get your camera out and own your chance to win a little something for your efforts with our May competition for top photos of the month.

Or perhaps you prefer to be a no-doer for a life?